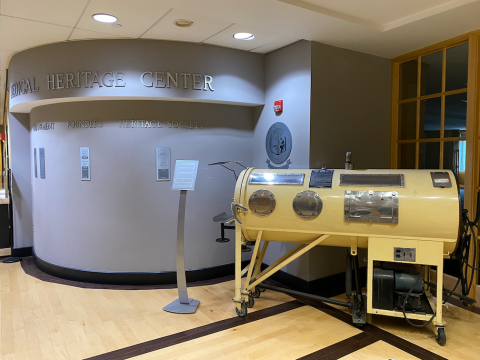 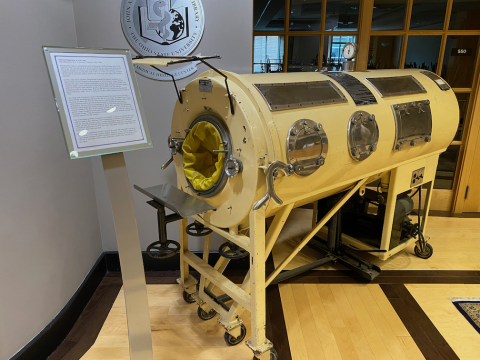 Manufactured by the J. H. Emerson Company, Circa 1940s

Poliomyelitis (polio) is a disabling and life-threatening infectious disease cause by the poliovirus. The virus spreads from person to person and can cause motor paralysis and disrupt the normally involuntary act of breathing. Incidents of polio began to rise to epidemic proportions, reaching their peak in the U.S. in 1952. An iron lung, a medical device used to treat polio patients, became one of the most iconic objects of the polio epidemic.

In 1931, John Haven Emerson, designed and invented the Emerson Respirator, an improvement over the Drinker model developed in 1928. Emerson's design replaced blowers and valves with a flexible diaphragm in a dual layer; made improvements to the chamber; added a quick opening and closing function; made an improved pressure gauge; added an emergency hand operation in case of power failure; and, later added a transparent positive pressure dome. With a $1,000 price tag, it sold for less than half the price of Drinker's model. The J. H. Emerson Company ceased manufacturing iron lungs in 1970.

Iron lungs such as Emerson’s create a microenvironment that mimic the way the body’s chest muscles and diaphragm move air into and out of the lungs. The patient lies on his or her back on a removable bed. The head rests on a stand outside the machine with a rubber collar around the neck to provide the seal necessary to maintain the pressurized environment. The movement of a diaphragm at the feet end of the tank alternately increases and decreases the pressure inside the tank to above and below the atmospheric pressure outside of the tank. As the pressure increases in the tank, air is forced out of the patient’s lungs through the mouth, and as pressure decreases in the tank, air is drawn into the patient’s lungs. Using the portholes, the patient is cared for by medical personnel with minimal removal from the chamber.

One of the biggest problems for patients was boredom. A mirror was attached above the patient’s head, so they could see what was happening around them. Most patients only used the iron lung for a few weeks or months depending on the severity of the polio attack, but those left with their chest muscles permanently paralyzed by the disease faced a lifetime of confinement. In 1959, there were 1,200 people using iron lungs in the U.S., but by 2017, there were only three.

Due to the near eradication of polio in most of the world with Jonas Salk’s vaccine in 1952, the use of iron lungs is largely obsolete. However, in early 2020, to address the urgent global shortage of modern ventilators needed for patients with advanced, severe COVID-19, prototypes of new, readily producible versions of the iron lung were developed.